There is no doubt that DDoS attacks are very irritating, even though they are becoming very common nowadays. These attacks are usually targeted at individual users, businesses or even corporations, and they often have damaging consequences. Nevertheless, with SimpliServers, you have nothing to fear because we provide complete protection and mitigation against DDoS attacks with a single IP capacity of 480+ Gbps.

What a DDOS attack even is?

A DDoS attack, which is an acronym for Distributed Denial of Service attack, operates by generating huge sustained amounts of traffic on the targeted network or server. Various compromised computers on different networks over the globe are usually involved in the distribution of the attacks.

A DDoS attack overloads the bandwidth of a server or drains its resources in order to make it inaccessible or unavailable to genuine users. A server or network simultaneously receives a large volume of requests from numerous points across the internet during a DDoS attack. The service becomes unstable or, worse still, unreachable as a result of the intensity of this “crossfire”.

To businesses, DDOS attacks can present loss of sales, lost of internal tools, dissatisfied customers or even total blackout.

There are 3 most common DDOS attacks that could make your site, application or business unavailable to the outside world. These are: 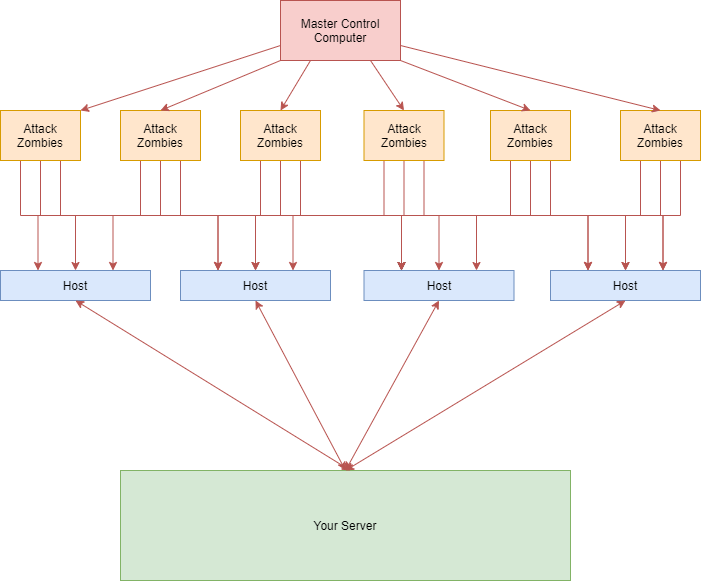 Stage 1: There is no attack

Internet-based services are used without any problem. The traffic passes through the backbone of our network then arrives at the data center. Finally, it is handled by the server that sends back the responses over the internet.

The attack is launched via the internet and on the backbone. Given the surplus capacity of the bandwidth on the backbone, the attack will not cause saturation on any link. The attack reaches the server, which begins to handle the initial attack. At the same time, analysis of the traffic flags that an attack is underway and triggers the mitigation.

Between 15 and 120 seconds, after the attack has begun, mitigation is automatically activated. Incoming server traffic is vacuumed by the VACs, hosted in OVH data centers. The attack is blocked with no duration or size limit, regardless of type. Legitimate traffic passes through the VAC and arrives at the server. The server responds directly without going back through the VAC. This process is called auto-mitigation.

Generating an attack is costly, and even more so when it is ineffective. After a certain time has passed, the attack will come to an end. Auto-mitigation is maintained for 24 hours after the attack has ended. This means any new attack that occurs within a few minutes, a few hours, or 24 hours will be blocked. After just 24 hours, auto-mitigation is disabled but remains ready to be reactivated upon detection of a new attack.

To effectively deal with such attacks, OVH has developed a state of the art Anti-DDOS technology. It works like this:

1/2000 of the traffic is analyzed by backbone routers in terms of “bytes per second” and “packets per second”. Subsequently, the system makes a comparison between the database signature and the samples. Mitigation is immediately activated if the results are positive. All these processes occur instantaneously.

DDoS attacks are aimed at overwhelming servers with an enormous amount of traffic. Because of its high network capacity, VAC System is capable of absorbing multiple attacks over a long period of time. This level of performance cannot be achieved by other providers. The most remarkable thing is that all of this occurs silently and does not in any way interrupt the activities of other customers.

The VAC is where mitigation is done, and it is made up of a Pre-Firewall, Firewall, Shield and Armor. As soon as a DDoS attack is identified, traffic is spontaneously diverted to the VAC. The VAC is designed to filter out compromised traffic and allow only genuine traffic through its filters.

The VAC consists of 4 stages and multiple devices. Pre-Firewall, Firewall, Shield and Armor. Each stage is meant to provide different defence strategy, while at the same functioning in unison, to filter even the largest DDOS attacks. 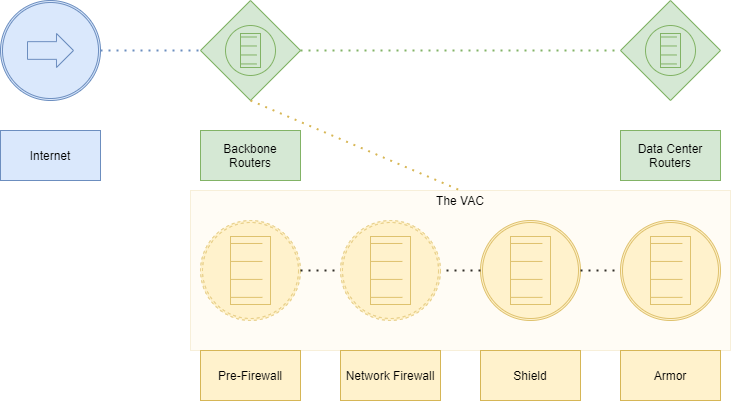 Information and schematics were modified and (partly) taken from our main DDOS protection provider OVH. We use them for direct and GRE protection.
The information listed here was public on their DDOS documentation page. If you need more information about this technology please refer to that page.